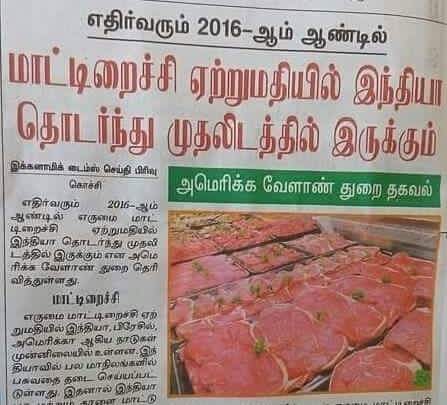 In a letter to Narendra Modi, Swamy said the subsidies given to cow meat exporters are extended out of taxpayers’ money “and millions of such taxpayers are hurt when their money is given by way of subsidy to meat exporters.”

He urged the Prime Minister to direct authorities to abolish subsidies to meat sector immediately “as a first step towards eventual banning of cow meat export”.

Swamy said while Maharashtra and a few other states have banned cow slaughter, now there is a need to withdraw the 13 types of subsidies extended to the exporters which are administered through Agricultural and Processed Food Products Export Development Authority ( APEDA).

“These subsidies thus encourage cow meat exports from those states which have not banned cow slaughter and thus crores of rupees of the nation go to the pockets of meat exporters by way of these subsidies,” he said.

Swamy pointed out that meat exports started in 1992 and have reached 15 lakh MT in terms of quantity and over Rs 30,000 crore in terms of value.

“In your 2014 election speeches you correctly referred to meat exports as pink revolution of the earlier government and said it should be banned,” he said.

The receipt of his letter was personally acknowledged by Modi. KOCHI: India is racing ahead in the export of buffalo meat, ironically, as more states in the country are enforcing a strict ban on slaughter of cows and bullocks. A latest report by the United States Department of Agriculture ( USDA) states India has widened lead over Brazil as the top global beef exporter.

Revising its October prediction by 3 per cent, the report released this month forecasts that global beef exports will touch a record 10.2 MT in 2015.

Despite a reduction in the imports by a number of oil-reliant countries including Russia due to shrinking oil revenues and weaker currencies, the exports will peak riding on larger shipments from India and to a lesser extent from European Union and Paraguay offsetting declines by Brazil, Uruguay and the US, says the report. With Russian market opening up to Indian buffalo meat export, the shipments are expected to increase in the current fiscal. Russia has approved four companies in India for supply of meat and the first consignment has already been shipped.

For eleven months to February, Indian buffalo meat exports clocked 13,56,794 tonne valued at Rs 26,965 crore recording a 11 per cent rise in quantity and 13 per cent jump in value terms.

In value, the beef export has surpassed the fiscal year 2014 export of Rs 26,458 crore. Given the growth rate, bovine meat exports could touch Rs 30,000 crore in fiscal year 2015, data of which has not been finalised by Apeda.

The volumes could touch 15 lakh tonne compared to 14,49,759 tonne in the previous fiscal. But of late, buffalo meat exports have slowed down.

“The devaluation of Brazilian currency and problems in the re-export of buffalo meat from Vietnam to Hong Kong have affected Indian exports,” said DB Sabharwal, secretary of All India Meat & Livestock Exporters’ Association. Vietnam is the largest buyer of Indian buffalo meat, while Brazil is India’s main competitor.

“It could bring an end to illegal slaughter and raise the price for buffalo meat, thus proving to be beneficial for companies like us who are engaged in legal slaughter and export of buffalo meat,” said Priya Sud, partner of Delhi-based Al Noor Exports. With prospects of purchases from a big market like Russia and several countries like Egypt buying more Indian bovine meat, the company will have to increase the production to full capacity, she added.

Currently, Uttar Pradesh is the largest beef producing state in the country.

While cows have long been sacred for many in the Hindu-majority nation, exports of buffalo meat remain a huge industry

India’s exports of beef are on the rise even as several states expand their bans on the slaughter of cows and bullocks, according to a report by the U.S. Department of Agriculture (USDA).

India has been the largest exporter of beef in the world since last year, and has further widened its lead over second-ranked Brazil with a projected total of 2.4 million tons exported in 2015 against Brazil’s 2 million.

The USDA report, released earlier this month, predicts that global beef exports overall will rise to a record 10.2 million tons, 3% higher than the October 2014 forecast.

Beef has also overtaken basmati rice as India’s largest agricultural food export in terms of value, according to data from the country’s Agricultural and Processed Food Products’ Export Development Authority, cited by the Economic Times newspaper.

Although the slaughter of cows, sacred for the Hindus that make up India’s majority population, has long been banned in several parts of the country, states like Maharashtra — one of its largest — recently expanded the ban to include bulls and bullocks as well. However, since India’s exports are composed entirely of water-buffalo meat or carabeef, the bans will not affect the figures cited in the report.