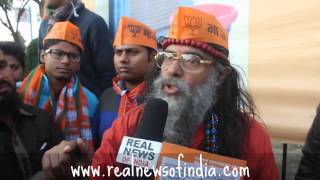 Swami Omji from Hindu Mahashabha is a contestant from Palika Bazaar for the New Delhi Assembly Elections. He says he is an independent candidate but is wearing a BJP cap. He claims BJP is his own party in other words a faction of BJP.

With the attire of a Sadhu he is very aggressive in nature and claims to kill Arvind Kejriwal. According to Swamiji his Hindu Mahashabha was the group which killed Gandhiji. Swamiji has been planted by BJP to cut votes of AAP and Congress. He is very aggressive in nature. He is just a sample of the many factions of BJP who are openly moving around trying to create communal violence. These elements could prove to be very dangerous in the society and the country as a whole.